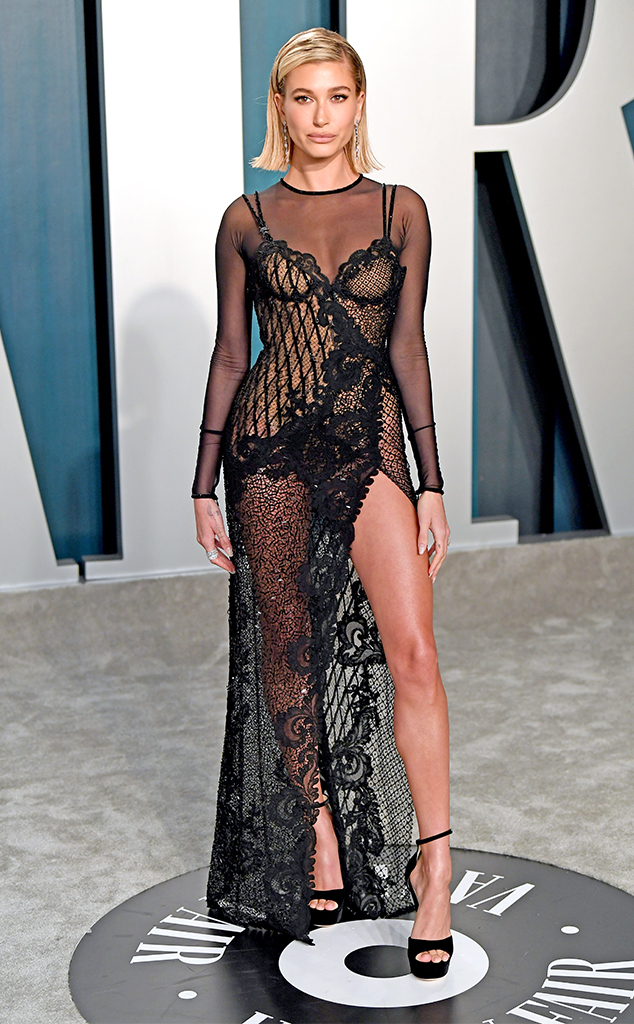 The supermodel may have missed the 2020 Oscars, but she certainly made sure to make a grand entrance at the Vanity Fair Oscars after-party, which is hosted by Radhika Jones at the Wallis Annenberg Center for the Performing Arts in Beverly Hills, Calif.

For the special occasion, the 23-year-old star sashayed across the red carpet in her riskiest outfit to date: a sheer black dress.

The statement-making piece featured peek-a-boo material, plenty touches of sexy lace, a thigh-high slit and some intricate beading. And since Hailey’s hot number looked like lingerie, it appeared she left her undergarments at home.

She completement her daring and dazzling lewk with soft-glam makeup and a chic hairdo, which kept the focus on her ensemble.

For her makeup, she kept things simple and fresh-faced as she donned nude lipstick, bronzed eye shadow and a slight contour that defined her modelesque cheekbones.

Her hair was slicked-down and parted to the side, which made her beauty look effortlessly elegant.

It appears for the star-studded celebration, Hailey walked the red carpet alone. Justin Bieber wasn’t spotted by her side, however, it’s unclear if he joined her inside the annual bash.

This past month, the supermodel opened up about her marriage with the pop star and some of their challenges. But the two lovebirds seem to be in a better place than ever.

“He had grown up so much. I was actually shocked. I think I had grown up a lot, too. He was somebody I’d always cared about so deeply and loved very deeply,” told Elle magazine about maturing and working to build her relationship with Justin.

“Obviously, it took work and getting past things between the two of us, but it was all very worth it,” she explained. “He’s an incredible, amazing man and such a good partner to go through life with. There is no one else I would have ever wanted to spend my life with except him. So, I’m lucky.”